I just realised only recently, that I have been singing David Crowder's recent song 'My Victory' all wrong. It's a beautiful song put together by Darren Mulligan, Ed Cash and David Crowder himself. The lyrics of the song juxtaposes the beautiful ironies of the cross:
If you aren’t allergic to contemporary folktronica, I recommend that you listen to it. Due to my hearing difficulties as an aging individual, I have been singing the last line of the chorus as "What the cross meant to kill is my victory” as opposed to "A cross meant to kill is my victory". There are glaring differences between my deafened version (no bloating intended) and that of Crowder's but both carry important truths about Christ's ultimate atonement for mankind.

Growing up as a preacher's kid, I was immensely blessed to have come across solid teachings from my father in and outside of home. Not all his teachings made sense to me years ago, as they do now, and I certainly miss being able to go to him for counsel. One of his greatest teachings was his persistent discouraging of my siblings and I to partake in what he called 'the rat race'. Merriam Webster defines it as "the unpleasant life of people who have jobs that require them to work very hard in order to compete with others for money, power, status, etc.". My siblings and I have come a long way since our father's passing in the Christmas week of 2011. God has blessed us immensely through family, friends and all four of us are in 'good stead' for the foreseeable future. But I fear that these earthly blessings will shadow the eternal perspective we ought to have.

In this rat-race of life, our focuses become fixed on goals of the world. From life’s first cry, we are trained by our society to perform and excel. Whether its academics or athletics, we are encouraged to compete with our peers and our shortcomings are blown out of proportions as failures. Excelling at academics, finding a job, affording a posh car, travelling the world, having picturesque family are ‘life goals’ that seem to drive us. Pursuing these ‘goals’ aren’t innately bad but when our lives and materialistic pursuits become our priorities, we lose focus of the purpose of life.

At Kettering University, our egos are bloated because of the potential the institution offers. With the co-op experience being the backbone of the curriculum, students are exposed to the luxury side of corporate America at a very young age, easily making 2-3 times the minimum wage, while being in school. A Kettering University education and experience makes climbing up the career ladder very feasible and it scares me to my core. I do want to be self-sufficient and be able to provide for those in need but I worry my pursuit of these amenities will turn me into an egomaniacal smug. The arrogance I see in most ‘educated’ and ‘successful’ folks, I foresee in myself as well. Thus I feel the need to pray like Agur in Proverbs 30:7-9 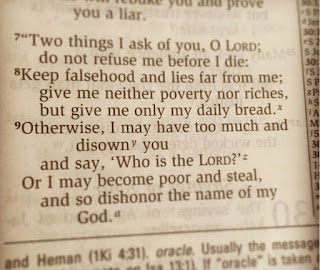 Following Christ comes at the cost of the world. It’s built on and demands a sacrificial life for the sake of the gospel. As I look at my current standing, I fear that I will run the rat race of vanity, neglecting my calling as a Christian to share the gospel with the unreached, and the deprived. I hope that in the coming years, I keep my eyes fixed at the objectives of running the race Paul describes in his 2nd letter to Timothy.  I pray that in the coming years, God takes my life for the sake of proclaiming the grace that brought me safe thus far, wherever it takes me.


To Live is Christ

Earlier this year in July, I was given the opportunity to publicly proclaim my faith as I was baptised at my local church. Although I had personally made a decision to follow Christ in late 2012, I hadn’t partaken in the sacrament due to various reasons. Even though this washing of water was only a ceremonial act of obedience, God in His providence, created in me an increasing desire to thirst for His word and seek His ways - Thanks be to God. While I fall short of Jesus’ teachings frequently, I have been able to experience His steady hand throughout my trials and failures. In my short walk with Christ, I realise that the life I have through Him, is more about Him than of my own.

One of the many great opportunities I’ve had this year has been the Bible Study Fellowship. At BSF, through the guidance of the Holy Spirit, I was able to re-experience the transforming power of the gospels, especially that of John’s. The God of creation, the Alpha and the Omega, invading into human history in the form of a humble servant, for the sake of the traitor-race, is powerfully portrayed in the Gospel of John. To learn that, out of His fullness, we are chosen and granted the unmerited gift of grace on top of grace is truly humbling and mind-blowing. It’s also empowering to know that to all who receive Him, given is the right to be called children of God.

For a fruitful walk with Christ, I realise that I must become less and He must become greater. I understand that apart from Him, all my efforts amount to nothing in this life. Therefore I rely on Christ for power and a life that springs to eternity. Therefore, I consider myself and my ‘victories’ unworthy of anything.  In fact, I consider my 'victories' nailed to that cross. Christian living is only achieved through dying to self and complete surrenderance to Christ. To live as Christ instructed is to let go of the desires of the flesh so that He lives in us. It is a notion that is baffling sometimes but is a necessary ingredient to a transformed life. This is not a call to the very damaging 19th century Keswick Theological notion that is ‘let go and let God’. Rather, this is coming to grips with our inadequacies as fallen human beings to find adequacy in Christ and Christ alone. This is to renounce confidence in our wisdom, will power and cling to that of God’s.  This is to call out for insight and cry out for understanding from God, as Solomon writes in the Book of Proverbs. To truly live is to abide in Him.

Personally, this is a call to abandon unashamed promotion of myself for the unequivocal proclamation of the gospel. In the coming year, as I look forward to finishing up my bachelor’s degree and potentially pursue a seminary education, I pray that only the ‘chief end of man’ is achieved through my plights. My chief end is to glorify God and enjoy Him forever, so that it is evident that the transcending power is from God - not from the broken, battered human being that I am. I pray I live true to the cross that indeed killed my victory - the wondrous cross that bids me to come, die and truly live; a love that demands my soul, my life, my all.

Popular posts from this blog

September 28, 2020
Seventeen years ago today, Charles Ratnamuktan Alban Hoole, known affectionately by many as Charles/ Muktan, met face to face with His Saviour Lord Jesus Christ. Life of Charles Hoole Charles/Muktan was born on the 18th of March 1951. He was the second son of Rev. Richard Hoole and Jeevamany Somasundaram of the Anglican Church in Ceylon. He was educated at St. John’s College in Jaffna, where he became notorious for his towering sixers as a young cricketer. Charles completed his B.A (Hons), and M.A at the University of Hull in Yorkshire, UK, after which he moved to the Department of Religious Studies in McMaster University in Canada for his M.A and Ph.D.   Marriage to Jaqui Charles met his wife Jacqueline Patricia Guiver during his time at the University of Hull Christian Union (CU) in the late 1970s, where Jaqui was serving as the Overseas Representative. Charles later became a Theological Students’ Rep in the CU where he brought along many overseas friends to hear the good news of Jes
Post a Comment
Read more

The Disciple Whom Jesus Loves

March 18, 2019
Sanctification often times feels like dying. Dying, because the old man is in fact being put to death by the Spirit. Part of growing in holiness is mortification. A grace-induced mortification of the flesh. Deep within my regenerate soul is the cunning old man, cowering as he is dealt lethal blows. This is a gracious work of the Holy Spirit. While it feels like God is killing me, He is actually saving me. The resulting pain is a reminder of the love of God. For in love, He set me apart to be holy and blameless like Him. He is actively working in my life to restore in me the 'Imago Dei' - the image of God that was marred by Adam’s sin and mine. The life I now in the flesh I live by faith in Jesus Christ, who loved me gave Himself for me. I am the disciple whom Jesus loved. He set his affection on me before the ages began - not because I am worthy, but precisely because I am unworthy. His love for me is from everlasting to everlasting. His love awakened me from the rotten de
Post a Comment
Read more

November 06, 2016
"America does everything better than any other country, including getting things wrong", said one of my favourite speakers. As the election day draws near, many of us are worried where the United States of America is heading both politically and spiritually. The rhetoric surrounding the major political parties and their campaigns have been full of malice and conceit from day one. Seeing the process of a presidential election in the U.S for the first time, first hand,  has made me somewhat vocal on social media. This has caused some of my friends wonder why, given the fact that I am Sri Lankan and am ineligible to vote in the U.S elections. I care because America, through God's providence, is a country that's given me second chances I wouldn't have had elsewhere. Believe it or not, I love America. I also believe that the presidential election here not only determines the future of the nation, but also the course of the rest of the world. The United States of Amer
Post a Comment
Read more

Moses Hoole
Sinner Saved by Grace through Faith: For every Tribe, Tongue, and Nation; For His Imperial Majesty, the Lord Jesus Christ, and the Glory of His Empire.